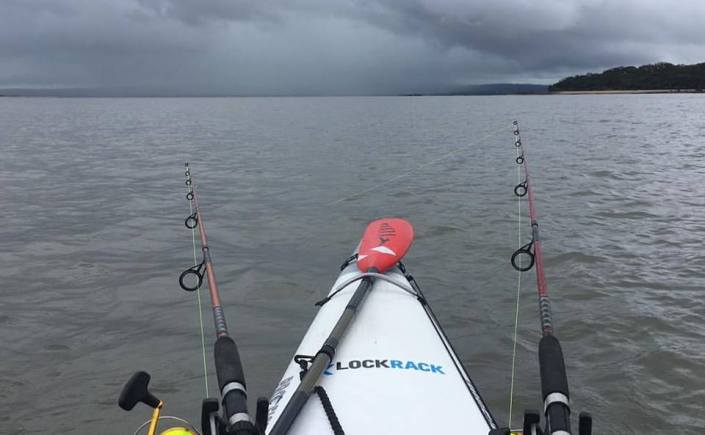 A well set-up anchoring system is a handy piece of kit, allowing you to safely and easily set and retrieve anchors especially in high flow areas. A good anchor trolley has multiple uses and can be used to connect any of the following to your ski: 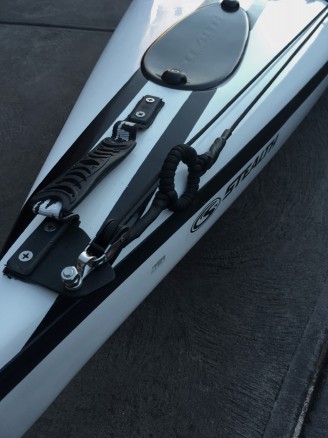 The anchor trolley is a pretty straight forward piece of kit, essentially a set of pulleys at either end of the kayak, some paracord running between with either end connected to a ring. This allows items to be clipped to, or threaded through the ring to be moved from the front of the kayak to the back. The key with installing the anchor trolley is to have the pulleys installed right at the tips of the kayak. This will ensure that the kayak sits straight in the current when the anchor trolley is sent back rather than swinging/sitting at an angle when the rear pulley is installed too far forward. It is also a good idea to wrap the ring using some of  the excess paracord. On glass skis, it helps protect the gelcoat in transit when the wind can make the trolley hit against the side of the kayak. It can also dampen noise when using stakeout poles near easily spooked fish.

Setting and Retrieving your Anchor

Lifting anchor is by far the more dangerous of the two, in terms of capsize potential, especially if you move your anchor trolley away from the back of the kayak towards the amidships, which is the case where people clip anchors directly to the anchor trolley via a carabiner. The goal is to disconnect your anchor from the kayak, spin 180 degrees to face into the current and then wind up your anchor line onto the spool. To achieve this safely, follow the steps below in order.

When planning your trip it is best to plan around the tidal flows. You can use the tidal flows to assist you to get to your destination as well as timing your trip so that you are setting and lifting anchor in the safer portion of the tide. The water speed varies throughout the tide and can be approximated by the 50/90 Rule outlined below. The end of the third hour after the tide change is the worst time to be lifting anchor in a high flow area as the tide will be running at maximum strength. This is why it is common for kayakers to fish an area like this one hour each side of the tide changes allowing you to make the most of the tide assistance for your trip. Let’s say your mark was <10km from your launch, you could put in between the third and fourth hour of the run out tide, paddle to your mark and be dropping anchor at the start of the fifth hour as the water is starting to slow down. You could then fish across the tide change and the hour after upping anchor as the water speed is starting to pickup again. You could then use the increasing water to carry you back to your launch spot.

For me this is the best way to fish areas like Lang Lang in Western Port. You can launch at the ramp at Lang Lang with 1m of water left in the tide curve and use the run-out tide to get to Jam Jerrup bluff, fishing across the low tide change, and returning to the ramp on the flood tide. To launch or retrieve at most areas in the top end of Western Port you will need to have at least 1m of water on the tide curve. This is particularly important because over a low tide all of the water will drain out to leave a mud plain, leaving you stranded until the water returns in six hours. In terms of deciding to fish over the high tide or the low tide, the high tide gives the flexibility of being able to come or go as you please but it is harder to pin point the fish. Over a low tide, you are committing to a longer session on the water so it is important to know the weather forecast, and have food, water and sunscreen for the session. The upside is that the fish will retreat to the channels making them easier to find.

3 thoughts on “Setting Up Your Kayak Anchor System for High-flow Current Areas.”